We are all about living more comfortably with less, which means we are in the process of making some modifications that will allow us to boondock (camp without benefit of hookups) more comfortably in The Toad, and for longer periods of time than just a weekend.

First, we invested in a set of generators, to keep us up and running while dry camping or during power outages, based on this recommendation from our friends, Lisa and Dan, of Always On Liberty.

Second, Tim took on an electrical system upgrade process that involved adding four 6-volt deep-cycle batteries, inverter, battery monitoring system and electrical monitoring system. Don’t worry, he’ll soon be writing a feature on how he got that job done, as I don’t understand enough about it to write it myself.

Third, because I hate shivering at night, one of Tim’s Christmas gifts to me was a heated blanket that runs off the RV’s 12-volt system, so that I can remain comfortably toasty in cold temps, even while we’re using battery power instead of shore power. (Before you buy: read photo caption below. It starts with SHIT, which should be a big clue.)

One problem: No 12-volt outlets near the bed.

Handy husband to the rescue! He ordered two wall-mount outlets (one for each side of the bed), and bonus: they have dual USB ports, so we can charge our electronics on them too! 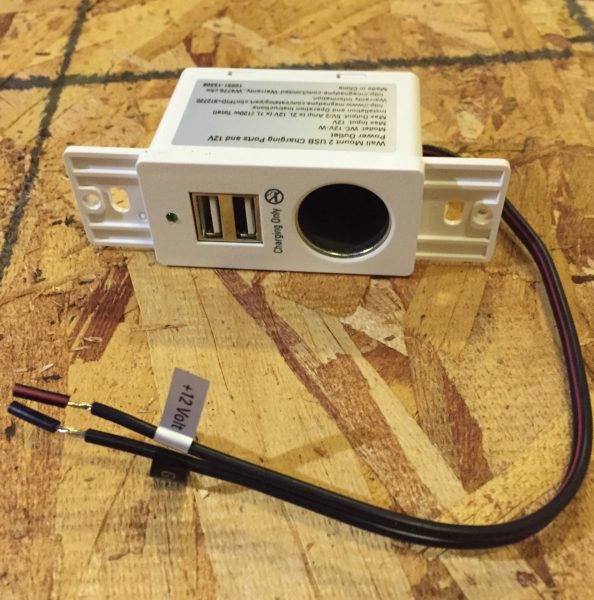 As you might expect, we had to take the bedding, mattress, and plywood cover off the bed platform and temporarily relocate them, which made for a great physical work-out but a very messy living room.

Tim then drilled holes in the floor, and ran a properly gauged wire from the 12-volt fuse panel in the kitchen, through the basement, and back up underneath the bed, where the wire splits to feed each outlet.

This project took about half a day, and both of us played a part. Tim did most of the work himself, as usual, but my assistance was needed to spot and feed the wire through the floor holes, and to holler “YES, THE LIGHT CAME ON!” when he flipped the switch to activate the outlets after the wiring was done. And both of us worked together to restore the bed to slumber-ready condition.

(Author’s note: a version of this post appears at Heartland RVs. It is printed here with permission.)

One thought on “A Creative Outlet for More Comfort”