Readers of my electrical system articles likely fall into two groups: those in suspense since February, and those scratching their heads trying to remember the subject of these series.

If you’re in the latter group, Part I of the series covered the planning and design, while Part II discussed research, costs and equipment selections. For Part III, roll up your sleeves!

Installation took longer than expected. No surprise. It also caused me to grimace and repeatedly mutter the above statement. Working extended periods in the belly of The Toad involved contortionism and a couple of bandaids, but the results have been worth it.

The oriented strand board (OSB) used in the RV’s front compartment wall complicated installation of the inverter, as the material does not hold screws well compared to plywood. To address this, I built a back panel from plywood covered by thin metal plates to deflect heat generated by the inverter.

Four t-bolts were used to hang the 40 pound inverter (see Figure 1), while screws were driven in from the basement side (thus gripping into the plywood) to hold the combined weight.

Two 240V/50A lines were run from near the circuit panel to the front compartment to complete the new service feed. The Electrical Management System (EMS) (Figure 2) was attached to the floor behind the basement wall after connecting the output side to one of the feed lines. Both cable runs were attached to the basement ceiling using strap hangers.

Lesson learned: pick screws just large enough to hold the cables while still short enough to not poke through the floor. Ouch!

Heavy duty (4/0, “four aught”) cabling connects the batteries and smaller components with the inverter. I made custom-length cables, saving money and weight. To determine the correct lengths, I placed the battery cutout switch, the shunt, and the battery fuse where I wanted them on the RV’s front compartment wall, and then built each cable to fit between them.

Newer Heartland RVs have battery cut-out switches to isolate the batteries from the RV’s electrical system for safety and maintenance. Our 2008 Bighorn lacked this feature, so I added a Blue Sea Systems m-Series switch.

Lesson learned: The m-Series is rated for high-amp circuits, but required modification to fit the large cable; the e-Series switch would have been a better choice.

The fuse block (lower left corner of Figure 3’s right panel) is used to protect the system, while the shunt provides the means to measure performance using the Pentametric monitoring system. One wire from each side of the shunt is connected to the input unit. Additional small gauge wires provide power and temperature readings. The battery interconnects provide a series-parallel configuration. I found Spax screws provide better holding power for components mounted on the OSB.

Making custom-length cables is as easy as measuring, cutting, stripping and crimping, right? Close. The process is simple, although three special tools and a couple of tricks are helpful.

Because of the 4/0s thickness, bends take extra room and cables should be laid out before cutting; high quality welding cable is a better choice than battery-grade cable because it uses numerous flexible small strands instead of fewer larger conduits.

Before cutting (measure twice!) consider how much cable will go into the end of the lug or other terminals being used (see Figure 4).

Lesson learned: I used the saw method of cutting the cable, but then had to use scissors to taper the cable ends to fit into the lugs. Buy cutters suitable for 4/0 cable; they will make the work easier, and keep you from being asked, “What the heck happened to the scissors?”

After cutting,  I used a simple utility knife to strip back the rubber sheath (and then scissored the strands to death). Apply antioxidant to the exposed strands and inside the lug before crimping. I used a regular hammer to strike the crimper (see Figure 5), but a 2 lb mallet makes for easier work.

Once the 12V cable runs were completed between the inverter and through the fuse block, shunt, and switch, I connected the two pairs of 240V/50A legs (not live yet) to the inverter. Completing this before installing the battery box gave me more room to work in the front compartment as I worked on my back looking up.

The battery box I wanted, which was the one recommended specifically for the quantity and size of batteries I have, would have taken a few days to ship. My goal was to complete the project before we headed to Quartzsite, AZ, for boondocking, so I fashioned one from locally-available options (Full disclosure: I actually fashioned two, the first prototype being an epic failure).

A Durabilt Storage Tote (Figure 6) is large enough to fit the four 6V deep cycle batteries, and has the added benefit of being considerably cheaper than the aforementioned special-purpose box. To keep it sealed and safe (charging flooded batteries releases gasses that must be vented to the outside), I added weather stripping to the top edge of the box, and a vent line to the outside.

Inexpensive straps were fastened to the RV’s steel compartment floor to hold the box firmly in place. Look closely at the picture of the box and you’ll also see a hole, near the bottom, that allows fresh air to be drawn into the box, ensuring proper venting.

Installing the battery box and finalizing the cables up to the inverter was pretty straightforward. Don’t forget to run properly gauged wires from new battery bank to the existing bussbar providing 12V to the RV’s fuse panel.

Lesson learned: Connect these to the output sides of the switch and shunt vice the battery bank terminals to include the draw in system monitoring and safety cut-outs.

Instrumentation lines were run, based on the component instructions, back to the cabinet inside the coach near the existing instrument panel. The cabinet contains all of the monitoring boxes with incorporated displays (Figure 7). Later, I added the Pentametric computer interface module by my desk, using a separate instrumentation line tapped off behind the basement wall.

At this stage it was time to pause and double check all the wiring and installations because the next step involves removing the RV from all shore and 12V power sources, and rewiring the circuit panel (Figure 8) and EMS. ***MAKE SURE YOU HAVE NO ELECTRICAL POWER IN THE RV.***

Without any fanfare, after days of work, I reconnected shore power and flipped the switch.

The 120V light in the RV was dimmer than a sleazy bar. I was crushed, and I had no idea what was wrong, but I clearly wasn’t getting adequate voltage. I quickly realized the problem could be with the inverter or the EMS, but I didn’t know how to test either one.

In desperation, I killed shore power, followed the reset procedures for the inverter, and tried again. Presto! To this day, I don’t know why the first test failed, and I have only had one incident requiring an inverter reset since then.

The next day we got underway for Quartzsite, AZ, where we parked alongside friends and fellow RVers for 12 days of boondocking. The system worked great as I continued to make tweaks and learn the intricacies of using an inverter to provide 120V power from batteries.

One lesson involved just how many amps were used in charging the battery bank; I am not able to run the generator in econo-mode until the bulk charging stage is complete.

There were other lessons too, but I’ve maxed my word count, and probably your attention span too. Feel free to comment below or contact us via our Facebook Page if you have any specific questions.

Disclaimer: Electricity and electrical systems can be dangerous to living things and electrical equipment if not handled properly. What I write will convey my own experiences. If you or anyone else should choose to use any of the information in this post, you do so at your own risk. If you’re not comfortable handling electrical circuits or equipment, find someone who is knowledgeable about such things to help you.

Got a long driving day ahead? The kind that requires departing before dawn, and not enough time to stop for breakfast?

Here’s a tasty and hearty option that you can bake the day before, for eating on the road. It’s even driver’s seat friendly! 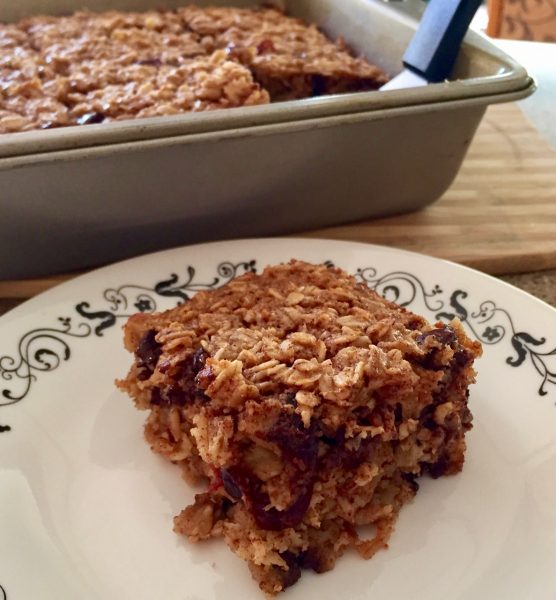 In another bowl, whisk eggs, milk, butter, vanilla, and yogurt.

Stir into oat mixture until blended. Add mix-ins if using, and stir to blend.

Spoon into a greased 9-in. square baking pan.

Bake 40-45 minutes or until set, and allow to cool completely. Although there is no flour in the recipe, the bars bake to a moist, thick, cake-like consistency.

Cut into 9 squares, then zip into sandwich bags or wrap in plastic for individual servings.

I get perfect results by baking these in my RV’s Half-time Convection Oven at 350 degrees for 22 minutes.

For a filling and fuss-free “Front Seat Breakfast” for driver and passenger/s, serve the bars with hard boiled eggs and bananas.

No need to save them for travel days. If you’re sitting in a non-moving location, you can try serving these squares as originally intended: in a bowl, with milk poured over top. Eat like oatmeal!