Sometimes, life has a way of helping us make an easy decision.

While we were parked in San Antonio for our biannual visit last month, there were two popular RV shows going on in Texas, but unlike last year when we were able to attend each one, both the Houston RV Show and the Austin RV Expo were scheduled for the same weekend in 2017.

The latter: 90-mile drive, heavy traffic, day-trip distance. But… our younger son, a second-year University of Texas Longhorn, lives there and as you might expect, he happily allows us to take him out for shopping and dinner. Austin? We have a winner! 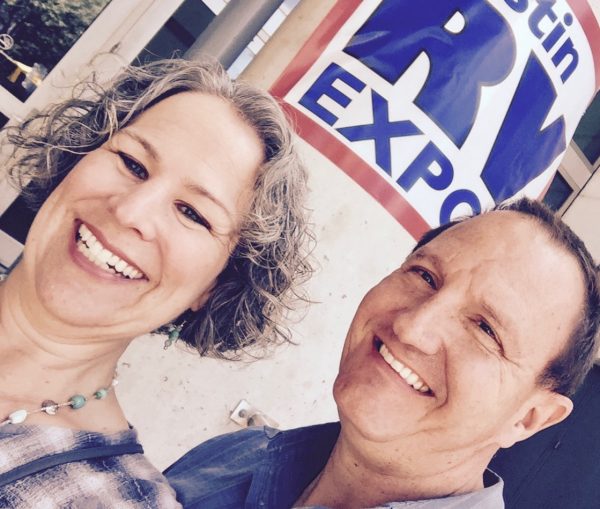 For those who might need a different set of parameters before making a decision in time for the February 2018 shows:

The Houston RV Show is big. As in, TEXAS BIG. In fact, according to the event’s web site, this is the largest RV expo in Texas, with 9 dealerships offering more than 600 recreational vehicles, plus RV-industry related vendors and campground representatives, and daily educational seminars.

In 2017, the show ran from Wednesday through Sunday, with admission prices of $12.00 for adults, $5.00 for children ages 6-12, and free for those under age 6. It is held in the NRG Center, which is adjacent to NRG Stadium, home of the NFL’s Houston Texans. I’m telling you: big.

When we attended this RV show in 2016, we ended up spreading our visit out over two days in order to take looks and second looks at everything we wanted to see, and by the end of Day 2, I literally resorted to drastic measures (grabbed another man, then faked death) to get out of there.

By contrast, the Austin RV Expo is petite. There were only 6 dealerships and a single row of RV-industry related vendors in the Austin Convention Center, which stretches over six city blocks in a highly congested downtown area. I was unable to find an estimate on the number of recreational vehicles offered, but this preview of “just some” shows 95.

In 2017, the show ran from Thursday through Sunday, with admission prices of $8.00 for adults, $6.00 for seniors and children ages 7-12, and free for those under age 7. In 2016, we spent several hours there, as we were intentionally shopping for a new RV at the time. Since then, we’ve decided to keep and upgrade our 2008 Bighorn, so this year we made it in and out in a record 90 minutes!

Know before you go to Austin

Tip 1: City traffic is notoriously heavy, and the convention center is surrounded by narrow, crowded, one-way streets, half of which always seem to be under construction. If you want to score a surface lot or street parking, arrive early. We ended up getting a late start, arriving after noon, and had no choice but to park in the garage at 2nd and Brazos, two blocks away. Although we made it in and out safely with our 1-ton dually, it was a white-knuckle experience watching the top of our cab just barely clear the concrete ceiling beams, and we will not repeat it.

Tip 2: Visit the event web site for $2/off general admission coupons, or try what worked for us in 2016. On our way to Austin, we stopped at an RV dealership to take a look inside a few models on the lot. When we mentioned to the salesman that we were heading to the expo next, he handed us a pair of complimentary tickets from a stash in his desk drawer, as thanks for visiting his business!

Tip 3: The convention center concessions are overpriced and unpalatable. Pack a lunch, or leave the building to dine in one of many nearby downtown restaurants. Just remember to get your hand stamped if you plan to return!

Tip 4: That said, there’s a bar. Inside the expo. You can walk around the exhibit hall with beer in hand, if that’s what it takes to get you through.

Tip 5: Austin is full of places to have An Experience, whether you’re into food, microbrews, indie book stores, live music, athletic/outdoor endeavors, museums, people watching, shopping, or any number of interests and activities. Open your favorite internet travel resource, search “Austin,” and then take or make time to explore more than just the RV Expo while you’re there. You won’t regret it. After all, friends do let friends get weird in Austin.