Believe me, I get the irony.

We wanted less stuff. We got rid of almost everything we owned in order to gain more freedom and more mobility.

So what the ever loving hell are we doing taking seasonal jobs with Amazon’s Camperforce, working for the planet’s largest consumerism enabler, during the months of the year when people are losing their minds in their eagerness to Buy All The Things?

We’re just gonna be moving it around. A lot. For pay!

And everybody likes to earn money, right?

I’ve made no secret that we live solely on Tim’s military retirement pension, and have done so by keeping our spending and our debt under control for the past four years. For us, the taking of these jobs is more about our need for new experiences than our need for income, and we know we’re very lucky to be able to work because we want to.

Plus, it’s Amazon — a business and cultural icon that we can’t imagine living without, even though we managed to find and buy things we needed (and… didn’t) without it for more than half our lives.

The company was born in 1994. Our sons? 1995 and 1997. It’s grown up with our family, with an order history stretching from toddler shoes to Legos to iPods to college text books. We want to be a part of it.

So… why the ever loving hell not?

Mmmmm, maybe because we’re not gonna know what hit us?

Although I’ve had many part-time volunteer and paid positions over the years, I haven’t worked a 40-hour week or had to clock in and clock out since 1994.

And Tim? Tim was a naval officer for 25 years, so he was used to being in charge of people, and now he’ll be in charge of precisely nobody. He will not be invited to morning staff meetings. He will be but a cog in the wheel for the first time since a stint flipping burgers in college back in 1980-something.

In other words: this will be a big BIG BIG change for both of us.

Here’s what we know:

Here’s what I predict:

And that’s all I’m willing pull out of my Magic 8 Ball of Expectations. Why? Well, because I remember that when we were awaiting the arrival of our first baby, we read all the books, we did all the research, and yet people kept telling us, “You have no clue. None.”

We thought those people were wrong.

So for these jobs, we’ve again done a lot of research. The big difference is that this time, we know we have no clue what it’s really going to be like. Hence, I’m keeping my predictions to a minimum. And I’ll evaluate the three above a bit later in the game.

For now, we’ve got one more sleep until show time, which is tomorrow morning at 0730.

My alarm is set — with Rocky’s Theme.

This is the “Before” installment in my trilogy chronicling our 3-month gig with Amazon’s Camperforce. Other chapters quite logically include a “During” and an “After.”

Bear with me while I learn a new trick?

Your reward will be this slow cooker recipe I like, in an easy-to-print format that my prior food blogging efforts lacked. See the cute little “print” button under the photo? Click that.

This recipe also happens to be perfect for cool autumn weather, and it’s fairly adaptable to various types of -free diets.

I had to use a recipe I already had a photo for, because I didn’t want to cook a thing and document every step and learn how to post it all at one go, so you get an oldie.

I first served this dish in 2011, and I’d happily give credit to its original publisher if I remembered where I’d found it in the first place, so if it’s yours, speak up! 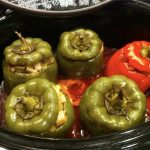 Hearty, savory, warm, filling, and very, very, juicy. I highly recommend serving these in bowls instead of on plates!

Let me know what you think!

Here are links to other recipes I’ve posted. I will probably not go back and reformat them, even though there aren’t that many, because I’m just not that ambitious, and I have no designs on becoming a Food Blogger (capitalization intentional). But I’ll post future recipes in the format above, for ease of both viewing and printing.

You can also find my recipes by going to my “Categories” drop-down bar and selecting “RECIPES.” This feature appears on the left or near the bottom of any page, depending on what type of device you’re using.

Yes, I use my slow cooker a lot. No, I have not upgraded to an Instant Pot.